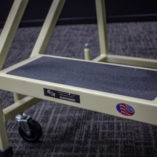 American made rolling ladders belong in the office. The quality and safety aspects alone make the juice worth the squeeze. The added value of supporting American manufacturing is icing on the cake.

The office is commonplace for imported stools and step ladders that come with an inherent disposable nature. Sure, these products are cheap, but their quality isn’t always safe enough. Long story short, why settle for less than American made?

Accountants, forced by trade to keep copious records, love the ease of access to shelves afforded by EGA’s office ladders. Built to be sturdy and maneuverable on carpet (without tearing it up on the first spin around the cubicles), the office ladder line from EGA makes dealing with those heavy file boxes a bit easier to roll with.

Supplies are always at hand

Supply rooms, copy rooms, and mail rooms often take up a lot of space. The most efficient use of space means going vertical – enter the office ladder. Rolling around a busy room makes the EGA office ladder a popular choice.

Available in a variety of colors to complement your office décor, EGA Office Ladders are easily maneuverable in crowded office environments—and then lock in place.

BACK TO: Rolling Ladder Assortment [Made in USA]